Everything You Need to Know About Air Pollution Skip to content 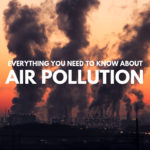 Living in a society where literally anything can pollute, one can’t help but wonder what this planet will look like a few hundred years from now. Regardless of how many people try to ignore the effects of pollution, it’s real, and it’s bad.

Poor air quality is starting to become a world-wide phenomenon, especially in countries with all sorts of well-developed industries, such as China or the US. The American Lung Association estimates that nearly 40 percent of Americans are at risk of developing some sort of fatal disease because of breathing polluted air.

What Is Air Pollution?

While air pollution can have a very complex definition, one can recognize it as being a mixture of toxic chemicals which are found in the air we breathe, and which the environment can’t absorb, dilute, or dissipate at a natural rate. When these toxic compounds exceed a certain threshold, they decrease the quality of the air, causing a number of undesirable consequences.

Generally speaking, “healthy” air is made of 21 percent oxygen, 78 percent nitrogen, and one percent – a mixture of carbon dioxide, helium, hydrogen, methane, and argon. The reason why air pollution is rising at an alarming rate is because there are so many sources that can contaminate the air: from methane to pollen, from smoke to soot, from mold to the pesticides people use to spray their gardens.

The complexity of the topic makes it difficult to cover absolutely every source of air pollution. For better understanding, we’ve tried to group the major causes of air pollution by the nature of the activity that triggers the problem, so let’s start off with man-made causes:

It’s also important to take into account the fact that there are also natural causes which may decrease the quality of the air. There are certain phenomena and natural forces that man can’t control:

AQI is an acronym for “Air Quality Index”, which is a numeric system that the U.S. Environmental Protection Agency uses to monitor air pollution. More and more countries have adopted this colored-labeled system in order to see which zones are the most exposed to hazards caused by air pollution.

As air becomes more and more polluted, it can impact both the human health, as well as the environment around us. People all over the world are living in cities where air pollution is increasing at alarming rates.

Long term exposure to highly polluted air can cause a series of health problems, such as:

Naturally, the impact that air pollution has on human health is just as dramatic as the one it has on the environment. Since we rely on the air we breathe, the water we drink, and the ground we walk on to sustain life, any damage to the ecosystem is eventually a threat to all living things.

Global warming has been a subject of intense debate, as several of the world’s most powerful countries have talked about the long-term impact of global warming on both the environment and human health. The planet’s atmosphere gathers a variety of natural gases that work to capture the sun’s heat closer to the surface of the Earth.

Also known as “the greenhouse effect”, this entire process stabilizes the temperature of the planet. However, greenhouse gases are also man-made, and the fact that they are on the rise has destabilized the natural balance.

Since the atmosphere now has larger quantities of methane and carbon dioxide (just to name a few), the Earth now traps more of the sun’s heat, causing the temperature of the planet to rise. The effects that global warming has on human health and the environment are still being closely analyzed.

When fossil fuels are burned, they release sulphur and nitrogen oxides into the atmosphere. As the amounts of such pollutants increases, they cause a phenomenon called “acid rain”, a form of precipitation that can be anything from rain to fog.

Acid rain doesn’t just affect the polluted air: the wind can carry these particles for hundreds of miles, covering larger areas. When acid rain ends up polluting the water, it can endanger marine life. As it falls on the ground, it can damage the soil and the trees.  The phenomenon has even been linked to building decay.

Depending on where it resides, ozone can be quite a protective gas. Ozone normally belongs in the stratosphere, creating a layer that can shield the Earth against the sun’s harmful UV rays. When ozone reaches ground level, it turns into a pollutant that puts human health at hazard.

The ozone in the stratosphere is slowly being destroyed by what we now refer to as “ozone depleters”. These are substances that range from hydrochlorofluorocarbons to halons. They are normally found in products such as pesticides, solvents, foaming agents, or fire extinguishers.

As ozone depleters slowing degrade the protective layer, it’s easier for UV radiation to penetrate the stratosphere and reach the Earth, causing everything from crop damage to skin cancer.

There are many different ways in which air pollution can affect soil quality, thus leading to crop damage. For example, the ozone levels registered at ground level can prevent grass, crops, or trees from growing, but can also lead to plant disease.

This can be a result of acid rain, or ozone depletion, which leads to an increase in UV radiation.

When there are a lot of tiny particles that meet sunlight in the air, that’s when haze is formed. Haze can be particularly dangerous as it obstructs visual field, but also causes changes in the texture and color that we see.

There are different types of activities that can emit particles contributing to haze, such as vehicles, construction activities, and power plants.

Eutrophication occurs when there is a high concentration of nutrients in a particular body of water, which can lead to eco-structural imbalance, such as fish killing or healthy algae growth. The entire process is quite common in old bodies of water, such as aging lakes, but it can also be accelerated by different human activities.

In order to reduce air pollution, it requires a combined effort on behalf of the citizens and the local authorities, which can force several industries to regulate their sustainability plants in order to improve their production by switching to a more eco-friendly process.

The steps that governments and local authorities can take in order to make this happen are up for debate, and pose a delicate subject that requires intense analysis of the industries activating in each country. As far as the citizens are concerned, here are some things that you can start implementing right now in order to do your part and help reduce air pollution:

While these are just some generic examples, there is an infinite number of things you can do to reduce air pollution. There is such a thing known as the “carbon footprint”, which is a sum of the greenhouse gases that human activities help produce either directly or indirectly.

Even without all the scientific knowledge behind it, everyone knows that air pollution is a bad thing. The entire topic of air pollution is extremely complex, mostly because in today’s modern world, almost each and every one of us end up polluting the air through one action or another.

Here are some more interesting (and troublesome) pollution facts:

Any process that creates particles which end up travelling through the air or gases that modify the natural composition of the air we breathe can be considered as air polluting. The sources of air pollution are too many too count, because they aren’t just manmade. Natural phenomena can also cause pollution, as part of Earth’s natural cycle.

What’s interesting and a little bit ironic is that the more means we discover to improve life and make it easier, the more we’re actually decreasing the quality of life because our comfort and our technological advancements are all in the detriment of the planet’s health.

Thankfully, there are a series of actions that everyone can perform in order to minimise their carbon footprint. In a joint effort between the citizens, the industries, and the government, some of these technological developments should be aimed at making production processes more sustainable, while also educating the citizens to do their part in protecting their environment.

A Look at The Best AirCare Humidifier Reviews